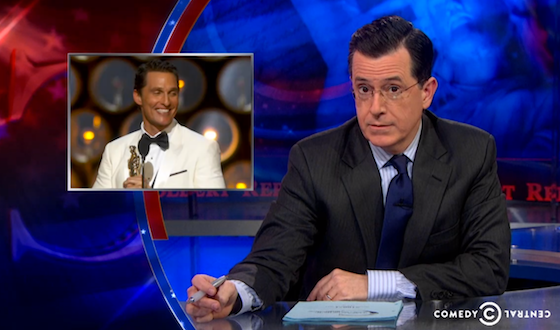 After eagerly waiting a month and a half from the day I reserved four tickets to the Colbert Report, my friends and I were finally ready to attend a taping.

We arrived at the studio, located in Hell’s Kitchen, at around 4:00 PM, where a line of around 20 or 30 people had already formed despite it being an hour and a half before the time stamped on our email confirmations. Fortunately for us, the interns in charge of the line and collecting tickets let us wait inside a tent alongside the building, which was significantly warmer than the frigid temperature. The wait on line felt like it passed much faster than it actually did, as we chatted with Colbertnation fans. Once 5:30 hit, we were let into the building, where we went through security check and then into a waiting room for half an hour. The wait in here was much better though, as there were TV screens showing the best of Colbert, as well as areas to take pictures. At 6:00 we were guided into the studio, which was much smaller than you see on TV. This was good however, as that meant everyone had a great view of the stage.   Once we were all seated, one of the show’s production assistants came out and told us to turn our phones off. Afterward, we were greeted by a stand-up comedian who did a 15-minute set, mostly comprising of making fun of audience members. After the opening act, Colbert came out greeting us, high fiving those lucky enough to have been seated in the front row. Colbert’s energy was contagious, right off the bat. Once the applause died down (and trust me, we applauded for a WHILE), Colbert did a ten-minute Q&A session; the best part of this was that he answered questions out of character, something most fans never get to see. Besides the occasional softball question like “what is your favorite movie,” there were a few good audience questions. One fan attempted to ask Stephen if there were any similarities at all between himself and the character he portrays on TV, to which he replied “Yes, believe it or not there are plenty of things we have in common. But that’s scary and I can’t afford to let people know what those things are!”

As soon as the Q&A ended, Colbert jumped right into the show. No sooner had he sat down behind his desk and the intro music blasted, did he shift seamlessly into character, slinging Colbert Nation bracelets into the audience while wearing a big grin on his face.

The taping proceeded as any other usual episode that you would see on TV. Colbert demonstrated his flawless delivery of his jokes and “news reporting.” In between commercial breaks, he would turn to the audience and wave or tell us that he hopes we’re all having an awesome time (what a great guy). Though the tapings are filmed in advance by a few hours for editing, Colbert only had to stop once to reshoot a bit.

As he started back up after the first commercial break, I had figured that the rest of the show would be very tame. That’s when the special guest walked out on stage; in character as an “Obamacare victim,” was the legendary Patrick Stewart. No one was expecting this in the audience; in fact, it took a full minute before everyone in the audience, those sitting farther away from the side entrance, to realize who it was. Two guys sitting behind me actually stood up and put up “X” shapes with their arms, calling out to “Professor X!” After a brilliantly hilarious and purposefully dramatic performance that culminated in him “dying,” Picard…I mean Xavier…Mr. Stewart stood up to take a bow, as production assistants showered him with roses. 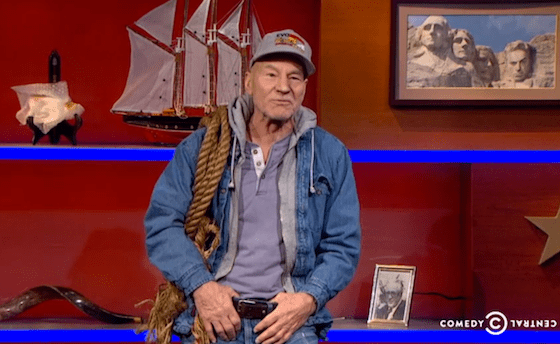 After another commercial break, we met the main guest for the night’s show; the author of The Dark Power of Fraternities Caitlin Flanagan. Ms. Flanagan talked about the darker side of frat life in colleges. Of course, in interviewing a guest on the subject of fraternities, Colbert brought in a keg and poured out beers for himself and his guest (into solo cups)!

Overall, this was a tremendous experience. The wait for the show doesn’t feel quite that long if you have friends present, or if you chat with other people on line. If you are a longtime Colbertnation member and fan like myself, this is definitely an experience you should have. Oh, and you get a free light-up Colbert Report pen. Swag.

EDIT: I definitely recommend it now, as this will be the last year of the show before Colbert moves on to become the new host of the Late Show!

‘Crisis On Earth X’ Was Brilliant in Its Absurdity